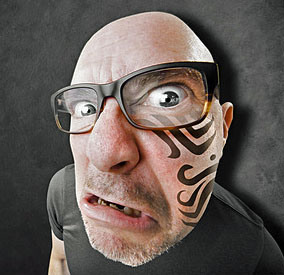 Yes, Tattoo Removal IS AN OPTION. I know I've said that tattoos should be considered PERMANENT, but the truth is that even Tattoos can be removed. Unfortunately, it can be much more complicated, painful and expensive than it was to get that tattoo in the first place. Depending on the method chosen and many other factors, it may call for several grueling treatments over SEVERAL MONTHS!

As I've also pointed out on some other pages of this site, Tattoo Covers can be expensive (paying even more for a second time with just one resulting tattoo), but an actual removal is like paying TWICE FOR NOTHING!

It's also important to note that there is no guarantee that you will get 100% removal of your old ink, and you may get some additional scarring in the process.

This is not to discourage you from doing what you've got to do, but make sure you have considered this carefully and have exhausted all other options before taking this step.

Since its fairly recent development, Laser Removal has become the method of choice for most peeps, overshadowing (while not yet completely replacing) other methods. I'll get to the laser method later, but you should know that there are less-expensive (and possibly preferable) options out there today!

Some removal methods are more painful than others, and the prices can vary greatly. On top of that pain and expense, going through any tat removal can be emotionally taxing.

There are several products on the market that you can use at home to remove (or at least fade) your tattoo. This presents many advantages over traditional and laser removal methods, the most obvious being that these treatments are much less expensive.

It may be a good strategy to start with an at-home product to start fading your tattoo, then follow up with a good cover (easier to do over faded tattoos) or professional removal method.

All of this not only depends on the procedure you chose, but is also largely dependent on the size, colors, composition and actual depth of the ink being removed.

Removing tattoos with a laser is a relatively new option – in fact it has only become feasible in the last quarter of a century or so. It was first performed with continuous wave lasers, and then "Q-switched" lasers became commercially available in the early 1990s.

Okay, I just gotta mention the OLD SCHOOL stuff...just because.

Historically, the accepted options for the removal of tattoos included such arcane practices as injections or topical soaking of these: