While I am not a tattoo artist, I have lots of experience in the chair. My unique tattoo is basically the culmination of many tattoos done over the span of 15 years. I understand YOU...because I have been there several times myself.

A little about me... 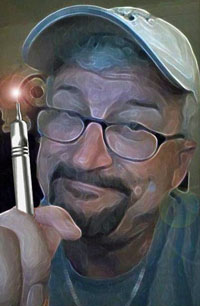 "Not a Tattoo Artist...but I could play one on TV."

My family moved a lot when I was a kid. After growing up in multiple locations in southern Arizona during the 60's and early 70's, my family headed north to Idaho at the end of 1974 where we finally settled down in the burbs outside of Boise where I stayed until finishing high school. Having been land-locked my whole life and wanting to see the world, I then joined the U.S. Navy and it was anchors aweigh!

In my 20 years of service, I was stationed in several stateside locations (California, Texas and Maryland); spent seven years in Greece, two in Spain and another two years in the Middle East. I also served aboard five Aircraft Carriers throughout the Mediterranean. All of this bouncing around afforded me the opportunity to travel extensively throughout Europe and much of Asia and North Africa.

I became fascinated with different cultures - to include their histories, languages, arts and customs. This fed directly into my desire to express these interests myself, and it is reflected not only in my own unique tattoo (combination of tattoos), but can now be seen in my mask collection, statuary and other home decorations and landscaping (thank goodness my wife likes that stuff!).

After retiring from the Navy in 2002, I continued my career as a Senior Analyst and Researcher for a government contractor...and the travel bug never went quite away. In recent years, my wife and I have traveled to Italy, Belize, Costa Rica and several locations in the Caribbean, Mexico and the eastern seaboard of the U.S. This summer, back to Germany, Austria and Switzerland with the family! 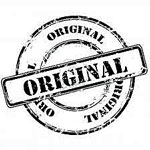 It's true - I'd wanted my own unique tattoo for YEARS but still hadn't settled on one specific design. I decided that just waiting for something to "pop into my head" was the wrong way to go about it.

Having worked in analysis and research for so many years, my natural instinct was to approach this problem logically and by the numbers. First and foremost, I had to formulate my requirements...what were to be the parameters of this unique tattoo?

I thought about what was important to me...what I wanted out of this unique tattoo.

I came up with four criteria: 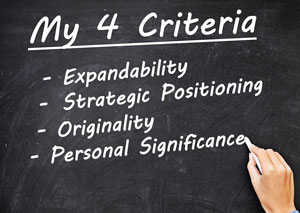 Keeping these guidelines in mind, I got started...

My Own "Unique Tattoo" Story...

Okay, let me step back a little...

It was the late 90’s. Although I was still in the Navy at the time, I wasn't a fan of all those typical Sailor tattoos that I'd often seen on my shipmates (mermaids, anchors, etc). However, I did like the newly popular arm "band" concept. I was also a fan of the partial sleeve – and considered it a bonus that a short-sleeved dress shirt could still conceal or obscure either kind.

Since I wanted to leave myself options for adding more tattoos to the design in the future, I decided to start with a thick band outline with panels inside for additional work if/when I was ready….and then maybe morph it into a partial sleeve once all of those spaces in the band were filled. (How could this end up being anything other than a unique tattoo after all this?).

FACT: After most people get that first tattoo, they will get more!

Well, that took care of my first two criteria…leaving just the last two. Obviously, the more I added to the already quite original design, the better chance that it would collectively end up being a truly unique tattoo. Okay, so that takes care of requirement number 3!

Now, onto number 4. What held great significance to me as an individual?

As a child, I had loved reading about ancient history and mythology and (as mentioned earlier) my interests were shaped even further by all of the travel I was able to do. But, more than anything else, living in Greece for over seven years really sealed it for me.

So, I came up with a sort of “Greek Temple” looking band that would serve as my starting point.

My Body is My Temple 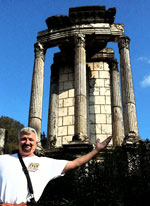 For the foundation of the Temple, I decided to use hieroglyphics on the simple outlined base. One of my favorite historical figures is Alexander the Great, and since he conquered Egypt I thought it would be cool to use his name as it had been written. Pronounced “al-Iskander” by the Egyptians, I found a website that helped me figure out the hieroglyphic writing.

For the roof, I wanted a slab of stone with a runic rendition of Tamerlane (one of my favorite medieval figures). Again, a website helped me sound out the runes for that name as well – pronounced “Taymur Lane.”

This Temple would be held up by five supports – a Stalactite in the back plus four different columns meant to convey passage of time and man's progress. The columns I chose were, from left to right: Minoan, Doric, Ionic and Corinthian (more on this here for all you art history buffs).

This left five "windows" or panels between them. I thought that the Temple would look pretty nice on its own, but then I could add a new design within each window at some later date.

It was easy enough to find great images on the internet for all of the different columns, so I printed those…as well as the graphics for the hieroglyphics and runes. I also made a rather crude drawing of how I wanted all this to come together, then set about finding a great tattoo shop in my area.

FACT: With each additional (independently conceived) element you bring into your design, originality of the overall design increases exponentially.

The artist I chose was intrigued by my concept and, after I explained how I wanted it to come together, he told me he would redraw my design to my specs using my drawing and the printouts. The next week, I came back to see what he had come up with – and it was amazing. After a few minor tweaks in scale and spacing, we scheduled my work.

It was indeed a unique tattoo – and actually turned out better than I had hoped. I could have left it at that and would still be proud to wear it, but like most people I just couldn't leave it alone.

Over the next decade I added more tattoos to the empty panels between the columns...sort of like my temple “comic strip." Going back to Greek mythology, I decided that each of the five windows would be a portal to a scene with a Greek God that represented something significant about me. Why not? They were flawed in unique ways, but had their strong points too. "Just like me," I thought whimsically.

Aphrodite (partially shown in the image below, to the left of Pan), nude except for a well-positioned leaf and posing seductively as she emerges from the foam in a giant oyster shell on a sunny day. The pose was inspired by some Tattoo Flash I found of a WW-II pinup girl. For this one tattoo, I actually let the artist take it from there and imagine the Goddess for himself. I chose her because she represents my fondness for Physical Love and Female Beauty.

Pan (shown in the image below), half goat and half man, playing his Pan-Flute to a full moon in a spooky dark forest while drunkenly spilling his wine. I chose him to represent the occasional Duality of my nature, the Seeker of Love and the Lonely Musician.

Nike, the "Winged Victory" standing in front of the gleaming Acropolis on a field of victory, holding the dripping severed head of one of the defeated Persian invaders, her right breast carelessly exposed. She would represent my penchant for Defiance of Authority, and my Successes in overcoming some of life’s challenges.

Dionysus, standing among his grape vines while enjoying his chalice of wine, with a slight mischievous smile on his soft features. He represents my more Playful and Hedonistic side; and a Love of Wine and Joyous Revelry.

Poseidon, bearded, disheveled, sinewy and angry, wading through a raging dark storm through giant ocean swells with lightning bolts blazing, brandishing his Trident. He represents my years as a Sailor, my Love of the Sea, and my more Fearless side. 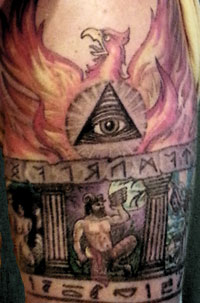 Finally, the band was done! NOW, it was time to turn the Band into a Partial Sleeve. No question...I could feel very confident that mine was a unique tattoo! But, I needed just a little more...

I'd always liked the way that some Tribal designs looked on men’s upper arms – even from a distance as a silhouette, but wanted something a little different and more colorful.

A Phoenix, huge with fiery wings spread, emerging above the Temple (Band) was my answer. This would represent my belief in second chances and my fondness for the Sun.

An All-Seeing Eye set in a triangle blazing from the mythical bird’s chest represents my search for wisdom, hope for the future and belief in my own destiny.

Other than a few return visits for color and line refreshments, that has completed my work (so far, that is!) – and with so many variables, I knew that I had something special. A truly unique tattoo! 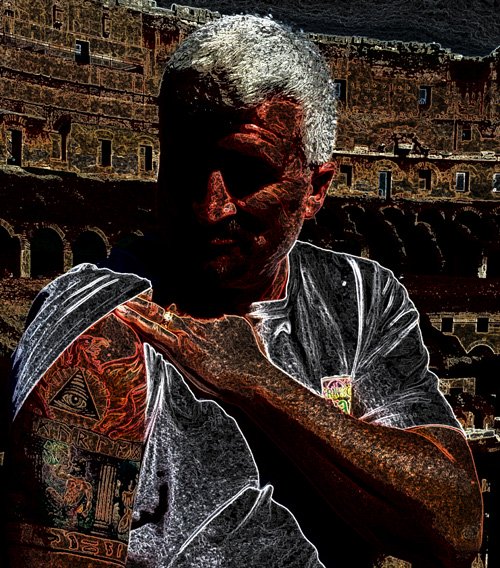